Welcome to Day 8 of our Sirens Samhain Celebration!

Before we go further, let's announce the winner of our Handmade Scarf/Shawl by Vickie Clay...

Maryland has been my adopted home since 2002. The first inhabitants of Maryland were Paleo-Indians who came more than 10,000 years ago from other parts of North America to hunt mammoth, great bison and caribou. By 1,000 B.C., Maryland had more than 8,000 Native Americans in about 40 different tribes. Most of them spoke Algonquian languages.
Established by English invaders in 1632 as a colony by Charles Calvert, the first Lord Baltimore, it was the 7th state to enter the Union in 1788.
Maryland's history is rife with all kinds of haunted stories. In a 1993 article in the Washington Post, reporter David Montgomery makes the observation that “The State of Maryland is the single largest local owner of haunted real estate”.  I'll just share a few from my own experiences here. 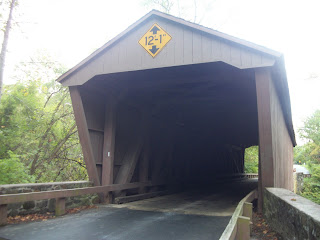 Built in the 1800’s, this is the last covered bridge standing in Harford County. It is also just a few hundred feet from the 242 year old Jerusalem Mill, listed on the National Register of Historic Places. The bridge itself is nearly 90 feet in length and about 15 feet wide. It’s completely made of wood and I can tell you from personal experience that the word ‘rickety’ is kind when driving through it. Legend has it that slaves were once hanged from its rafters during the Civil War. Maryland, while being a Union state, was very sympathetic to the South, and many nightriders captured and sold back into slavery those that made their way along the Underground Railroad. Hundreds of personal encounters have been recorded there. 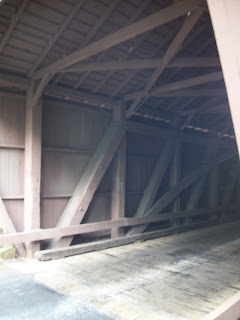 The most common is that when driving through the bridge, if one looks in the rearview mirror, one can see a body hanging from the rafters. There have also been sightings of women in “old-fashioned” clothing walking around the bridge area, only to disappear upon closer looks. In the interest of ‘fair reporting’, I’d like to point out that at the Jericho Mill on weekends, there are a lot of re-enactments that go on, and women dressed in old fashioned clothing would be common.
I have personally never seen either of these, but one of my family members did see a man in a black hooded cloak run out in front of their car in the middle of the night just before they crossed the bridge, and then he disappeared. 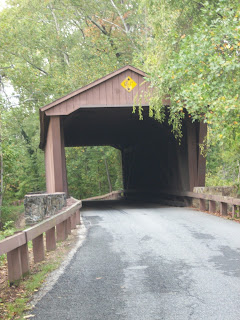 I've had an eerie experience at the bridge one evening. It was a few years ago at dusk, and a friend had taken me to the bridge to show it to me. As we pulled up in my car (probably 50 feet from the actual bridge) a fog appeared out of nowhere and enveloped the road to about 4 feet in height and covered the area all around the bridge. We slowly pulled up into the bridge and drove across, turned around and returned across the bridge.. the fog seemed to follow us ( and the temperature dropped drastically during this time as well) until we came through the bridge and to the Jerusalem/Jericho road crossing. As we looked back.. the fog had completely disappeared, as if it had never been there. Needless to say, we were a little creeped out by it ;)

Thomas Run Road is host to one of the top community colleges in the nation- Harford Community College. It’s also host to a strange ghost tale a little further down the road. 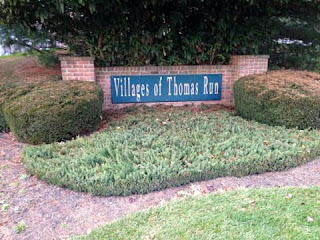 There is a quaint community there called The Villages of Thomas Run (upper middle class neighborhood). Hundreds of witnesses of all ages over the years (dating back to the 1800’s, although the housing area hasn’t been there that long) have reported a man dressed completely in black with a stark-white face running through the neighborhood at various times, but mostly at night and in the rain. More than a few residents living near the woods have stated that someone is up to mischief around there- they will hear their doorbells ringing and when they answer, no one is around. Is it the “Tractor Man” (as he’s been affectionately named)? 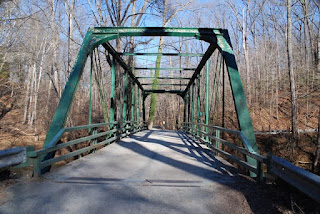 There are two ghostly tales on Bottom Road, which runs through several areas of Harford County and into Baltimore County, and there is a bridge over the Little Gunpowder River on Bottom Road.

The first tale involves the sighting of a little girl (ages have been reported from 4-7) at the narrow end of Bottom Road in a torn, bloody dress, holding a bloody teddy bear and crying. The sight is so startling that most travelers who have seen it, have actually stopped to help the little girl and when they do, she disappears.

The second is located at a certain area of Bottom Road where one must stop the car. At this point, once the car stops, everyone in the car gets the sensation that they are going backwards, even though the car is stopped on a flat road with no earthly reason for this sensation to occur.

This eatery pays tribute to its history, and even the waitstaff dresses in old-fashioned colonial garb. You might even feel as though you've traveled back in time when you sit down. Employees claim to hear clocks chime, even though the clocks themselves are seemingly broken. I have taken my family here, in the hopes we were going to get a ghostly visit. 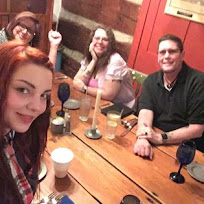 Phantom footsteps can be heard throughout the building. Although it's startling to guests, the waitstaff has grown used to it. The occasional apparition appears as well. Union Hotel Restaurant used to be many things throughout the decades, including a brothel that was known to turn violent. 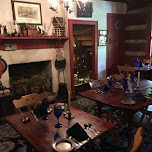 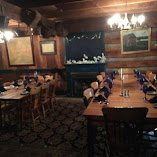 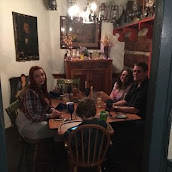 Tales of murder and suicide ran rampant, and some of the tragic souls remain.  We never saw any ghosts, but there were a couple of spots that felt "chilly." The spirits are known to be harmless, and the comfort food served here is worth the trip. 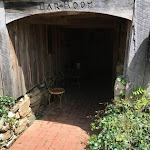 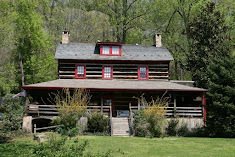 There are entire books written on the different haunted places in Maryland. There are ghost tours galore at this time of year.  My daughter and I have experienced all kinds of unexplained phenomenon here. And, it is for that reason that I don't want to live anywhere else :)
Happy Haunting!
Alexis

Serves 8
Ingredients:
1 1/2 cups water
2 tablespoons plus 2 teaspoons honey
1/2 cup fresh lemon juice
2 cups apple brandy
3-inch cinnamon sticks (optional)
Directions:
In small saucepan, bring the water to a boil. Remove from the heat and stir in the honey until dissolved. Stir in the lemon juice and apple brandy. Set a cinnamon stick in each of 8 mugs or heatproof glasses, pour in the hot liquid and serve.
I thought it would be nice to do a take on a traditional Autumn/cold weather classic. I had actually never had a “traditional toddy” before this point and wanted to give it a try, it had always sounded like the perfect, quintessential, cold weather drink!
I was wrong. My apologies to the toddy lovers of the world but I did not enjoy this drink at all! I took one sip and ended up pouring out the rest. I don’t know if it was the amount of lemon, maybe not enough honey, I really don’t know. As this recipe was written I did not particularly care for it and would not make it again. It may seem strange to include this recipe when it wasn’t one that I, personally, enjoyed but the purpose here is to give my honest opinion about the recipes I try. I also know there are scores of people in the world that will take one look at this recipe and think it sounds delicious and will actually LIKE it when they try it! Every palate is different and someone shouldn’t miss out on a drink they enjoy just because I didn’t like it.
Someday I may return to this recipe and monkey with it a bit, try to turn it into a version that works for my tastes. As with most of these recipes there is plenty of room for changes based on personal preferences so don’t despair if it doesn’t turn out how you thought it would! I turned my apple brandy into Butter Beer, I’m sure you will think of something!

Being a good Greek/Irish American gal, I have to combine some of my heritages together. Today, I'm going to take a traditional Greek Red Lentil Soup recipe and add some American squash (aka pumpkin) to it.
To those of you who are intrigued, you are my tribe! Go forth, my adventurers, and enjoy this delicious taste of European-American mix.
Ingredients:
Extra Virgin Olive Oil
1 large onion, chopped (I use candy onions or vidalias)
3 garlic cloves, minced (yes, feel free to use already minced)
2 carrots, chopped
3 tsp dry oregano
1.5 tsps oregano
1 tsp fresh rosemary, chopped
1/2 tsp red pepper flakes
2 dry bay leaves (remember to remove them before serving!)
1 cup crushed tomatoes (canned)
7 cups of chicken or vegetable broth (go low sodium- it won't hurt the flavor)
2 cups red lentils, rinsed and drained
1 large can of pureed pumpkin (do NOT use pumpkin pie mix!)
Kosher salt
Lemon zest (1 lemon's worth)
Juice of 2 lemons
Parsley and Feta cheese for garnish (optional)
Directions: Heat about 3 tbsps of olive oil until it's "shimmering" but not smoking. Add onions, garlic, carrots. Cook for about 3-4 minutes, stirring frequently. Add your spices and bay leaves. Cook for a few seconds until you smell the fragrance. Do not overcook or burn.
Add crushed tomatoes, broth, lentils, and pumpkin. Season to taste with salt. Bring to a boil, then lower the heat and simmer for about 20 minutes (until the lentils are fully cooked).
Remove from heat. Let the soup cool for about 10 minutes (if you have the time), then use an immersion blender to puree the soup. Pulse a few times until you get a creamy consistency.
Return the soup to the heat, and stir to warm thoroughly. Now, add your lemon zest, juice, and garnish.
Top with olive oil and feta cheese. Serve with your favorite bread! 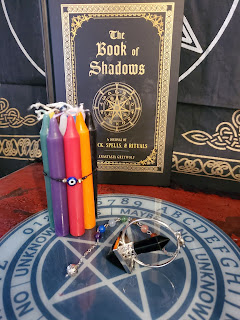 One each of the following:
To enter: United States Residents-
Go to Ethereal Grind, peruse the wares, then come back and tell us about your favorite item in the comments. We must have your name and email address in order to notify you if you win. You may enter that information in the comment, or you can enter it here, for privacy.
Bonus entries: (1 comment= 1entry)
To enter: Canadian residents-
Canada law requires that its residents "earn" their entries with a quiz or exam. For four entries, here is your quiz question:
Which city is the oldest in Canada?

Your entries will be pulled tomorrow morning, east coast time, and will be numbered by Alexis Kennedy (sponsor). She will then run a number generator at random.org, and will announce the winner on tomorrow's blog post. The winner will be notified first via email. The winner has 36 hours from announcement to claim the prize, or it will go toward the Grand Prize Giveaway on October 31.

If you have any questions or concerns, please email sirensallaround@gmail.com and we'll happily respond. Note: The sponsor is not eligible for any giveaways.

That's it for today! Make it magical!

Photo courtesy of Miikaa Luotio Brightest Yule Blessings to you and yours! Our celebration was short and sweet, but we're thrilled tha... 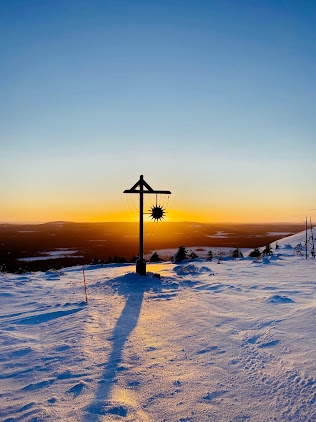